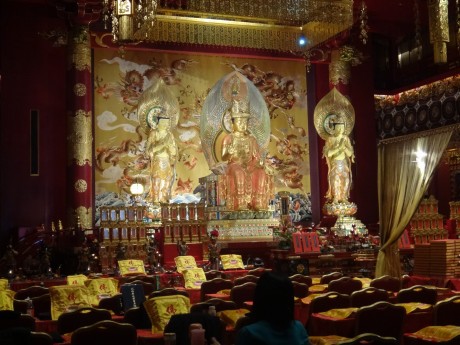 Today I had a very unique opportunity to explore the temples of 3 very distinct religions.  I was in the great company my travel guide, Anna Ong.  A native of Singapore she has a very deep understanding of the cultures and religions that dominate the country.

Our day began with a visit to the Buddah Tooth Relic and Temple.  The temple is very ornate and stunning on the inside.  The temple contains the statue of the God of Mercy upon entering.  On the fourth level of the temple there is an altar housing the “tooth relic” inside a glass enclosed room that only very important patrons of the temple ever get to enter.  The tooth looks alot like a piece of drift wood you might find along a shoreline.  There were lines of people waiting to pay reverence to the tooth relic.

Next we visited  Sri Veeramakaliamman Temple Hindu in Little India.  Before entering the temple we removed our shoes and our feet were washed.  In the temple patrons were offering gifts of flowers, fruits and nuts.  Upon accepting the offers the minister would chant a prayer for the family or someone specific at the request of the patron.  This Temple is dedicated to the Hindu goddess Kali – goddess of eternal energy.

Finally, we visited the Sultan Mosque.  The mosque’s main building is orientated at an angle to the grid of roads in the area so that when a worshipper enters the main prayer hall and faces the mihrab (a main altar of sorts), he also faces the direction of Mecca.  Outside, the gold-colored dome sits on a ringed structure made up entirely of glass bottles.  The story behind this ring of bottles is very heart-warming. While the rich donated from their gold stashes to the building of the mosque, the poorer folks raised funds by collecting and selling used glass bottles. 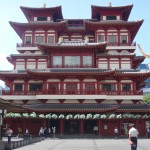 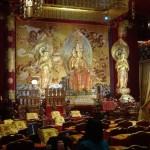 The “main” buddah in the temple 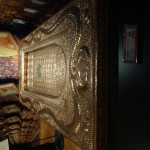 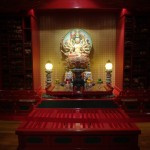 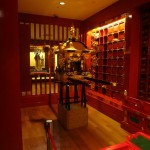 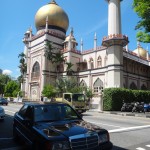 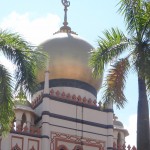 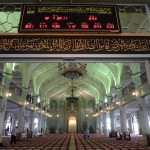 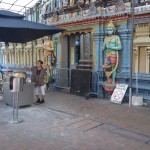 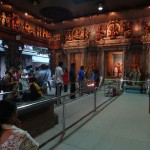 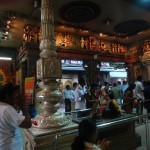 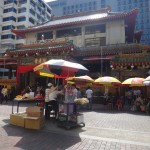