The Japanese seem to have a fetish with toilets. They come in many varieties each with their very own personality. Today I found myself in a train station faced with the dreaded “squatter”. This is the most common toilet across Japan and for me the most intimidating. I found myself wondering what I should do with my pants. Then I spotted an “instructional sign” to help westerners learn the art of the squatter. Yes, instructions…who knew something some simple could be so difficult? I ultimately decided to remove my pants out of fear that I might just lose my balance :>

My hotel room is equipped with a Japanese “washlet”. These are increasingly popular as they offer amenities such as a seat warmer, a bidet (water spray that washes you while sitting) and a drier that completes the process. The washlets are being installed as a way to cut down on the amount of paper consumed annually in Japan. There are also instructional signs for the washlets in Japanese warning not to stand on the seats! The office building I am working in this week also has washlets but even more modernized as these play classical music, have automated lid openers and water pressure controls for the bidet.

Perhaps the biggest shocker of them all was when I entered the restroom and there were two people standing (backs to me). I realized at this point that the restroom is unisex and the standers were simply men at urinals (of the squatter variety). I asked the ladies in the office about it and they informed me I am just to ignore the men and move on the stalls…YIKES! What an eye-opener today was… 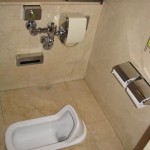 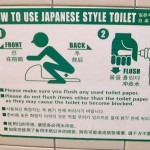 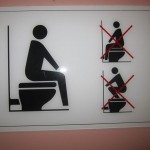 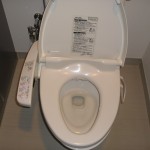 Japanese Washlet with Bidet and Drier